Since the release of IBM Cognos TM1 10.2 it has been possible to leverage multi-core CPUs into 100% action as the MTQ (Multi-Threaded Query) allows to spread queries along multiple cores. Unfortunately this applies only to queries (as figure 2 here illustrates), therefore the TI processes are still ran in single thread and can only use one core at a time. This quite annoying because if you have for ex. 64 cores you end up running CPU-intensive TI processes only with one core! With some serious magic this limitation can be of course turned around with little help of tm1runTI.exe tool. With it’s help we can start multiple TI processes at the same time via command prompt and achieve the consumption of more than one core at the same time!

The batch file itself is very straightforward: it needs authentication information and the name of the process that is going to be executed in parallel.

The parametrized wrapper TI process (Maintenance.Execute.Tm1RunTI.Parametrized) also takes parameters: TI process that is going to be executed in parallel and it’s parameter names and corresponding values:

The actual code is also nice and simple. It just checks whether the parameter values are given and generates a command prompt batch file call and the executes it in the command prompt:

Now that the core modules are introduced it’s time for and usage example. Lets say you have multiple big cubes and you want to make copies of versions in each of the cube periodically. With big cubes and big data amounts that could take long as TM1 only uses 1 core for the TI process execution. But here we can now make a big difference: we can divide the copying of the versions by year and do the copying for each cube at the same time (the only limitation here is the amount of cores available).

Here is the example code:

What we do here is that in the outer while loop (has been left out of the picture) we iterate trough all the cubes that we want to process with the version copying. Then in the inner while loop we go through years between 2006 and 2018. Depending on the amount of cubes we could end up with for example +100 separate TI process calls. As they are separated from each other by the time dimension they dont lock each other and can be ran at the same time (this is the most important part: one must design the runnable TI process in way that when it’s executed in separate threads the executions dont lock up each other!).

So, when we bring this piece of code into action we sure can take everything out of the expensive PVU’s as we can see here: 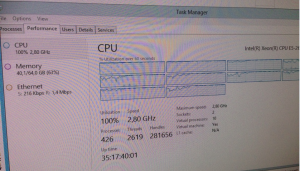 The 10.2.2 introduction of MTQ was a relief and it’s a feature that should have been there 10 years ago when multi-core CPU’s arrived. Unfortunately TM1 still lacks the out-of-the-box feature to execute TI processes in parallel but with this little trick we can overcome this limitation and reveal the full power of the CPU in our TM1 solution!